Warning: "continue" targeting switch is equivalent to "break". Did you mean to use "continue 2"? in /var/www/vhosts/blog.agdisplays.com/httpdocs/wp-content/themes/Divi/includes/builder/functions.php on line 5684
 What is EMI and How Can It Enhance My LCDs? | AG Displays Blog

What is EMI and How Can It Enhance My LCDs? 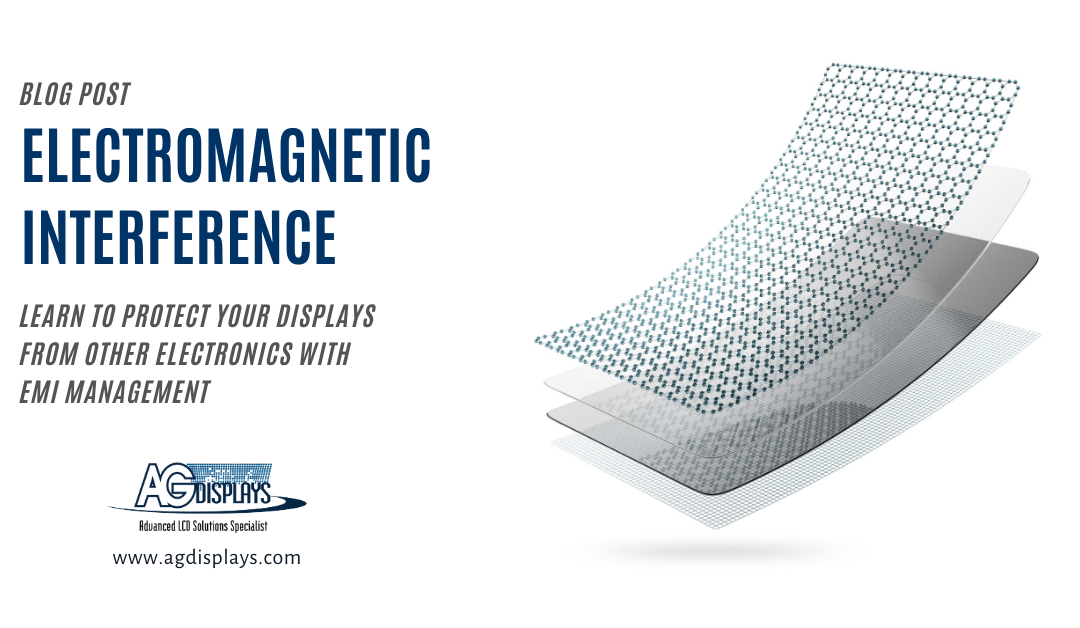 Electromagnetic interference (EMI) is one of the chief concerns among engineers designing electronic systems for the Military, Transportation, or the Law Enforcement industries. EMI (sometimes alternatively referred to as Radio Frequency Interference – RFI) is a type of radiation emitted by electronic devices that can affect other near-by electronic circuits. All electronics radiate some level of EMI, so its important to protect susceptible components, because high levels of EMI radiation can have negative consequences towards affected electronic devices, — up to but not limited to complete device failure. LCDs and touchscreens are highly sensitive to the effects of EMI, and this can lead to dangerous safety concerns for the equipment, the operator, and their surroundings. For example, imagine a commercial pilot experiences a high EMI spike which causes their navigation displays to fail, or hampers their ability to input important controls. We can understand intuitively the importance of protecting our displays from EMI, and with AGDisplays’ EMI protection services, we ensure maximized optical performance with strict EMI compliance.

Effects of EMI on LCDs

EMI can affect image quality and data function of an LCD. Effects such as scrolling lines, color distortion and complete image failure are all common symptoms of EMI. Touchscreens can also be affected, with EMI often causing erratic or false touches, or interfering with the touchscreen’s ability to respond at all. EMI emanating from a display can also be a problem. Sensitive equipment, sometimes including a device’s own peripherals, can be impacted by a display’s ambient electrical field. It is important to consider existing EMI requirements when incorporating an LCD, or any other electronic, into an existing system.

While all electronics exhibit some level of EMI production, the most common major sources of EMI include: cellular networks, microwaves, WIFI, radio and satellite signals, electrical surges, solar storms, RADAR, and power lines. Less common, but more threatening sources of EMI come from the intentional use of Electromagnetic and nuclear weapons, which can be used to disable a military or civilian’s use of electronics.  Certain industries, including the Military, Transportation and Law enforcement industries have additional unique EMI challenges.

Military EMI concerns are crucial to the integrity of the equipment on the battlefield. Much of the technology found inside of military gear and vehicles is coordinated to work together, e.g. inside of a tank, a turret may be positioned by a large electric motor just a few inches or feet away from sensitive targeting equipment and display controls. Or, it might be the nature of the battlefield that determines the levels of EMI, such as a bomber flying over a thunderstorm, or a large metal battleship with different EMI concerns depending on whether equipment is located on-deck or below-deck. Another concern is that as new electronics are added to legacy systems, unsuspected incompatibilities can occur.

As warfare continues to incorporate electronics and advanced technology, the disruption of these abilities is actively sought by all sides. Many modern weapons of mass destruction are designed not only to physically harm, but also to incapacitate and destroy a population’s access to communication networks and electronic devices. Electromagnetic Pulse (EMP) and nuclear weapons threaten a new age of “Blackout Warfare” against both combatants and civilian infrastructure. While nobody can predict such a scenario, AGDisplays works to help strengthen our Military by offering EMI solutions for all military displays no matter the environment, whether a new integration, or as a retro-fit or replacement necessary because of a newly added component.

EMI concerns for the transportation industry, while never an afterthought, is undoubtedly a concern gaining more and more attention. EMI impacts every automotive electronic system, and vehicle manufacturers are beginning to integrate more and more devices into their cars; from large touchscreen displays, to complete battery propulsion, and AI automated driving. The proliferation of fiberglass bodies (as opposed to sheet-metal) also means that external EMI sources are more likely to enter the cabin. As displays account for more and more of the interior design of a vehicle, its important to account for EMI to ensure the functionality and aesthetics of the driving experience, and for the ensured safety of the driver and passengers. What started as small segment displays for the radio, and early GPS displays for navigation, has turned into fully digital dashboards, WIFI connected smart screens, and touch controls for entertainment. AGDisplays helps to ensure a comfortable ride by offering EMI protection and integration for a wide range of automotive LCDS and OLEDs.

For aviation, EMI can affect radio communication, RADAR signals, and autopilot systems. The abundance of in-flight displays, cockpit controls, and passenger’s devices means there are many opportunities for Electromagnetic Interference inside the cabin, while lightning, solar flares, and concentrated electrical fields threaten EMI from the sky. AGDisplays works with various agencies, including the FAA, to repair and replace both cockpit and in-flight entertainment displays. Our LCD EMI shielding methods can help protect planes and passengers from incidental EMI contamination.

Light rail and commuter rail systems, which run on powered overhead lines or electrified tracks, present extra challenges in terms of EMI production and protection, as do larger freight trains, which are often driven by large electric motors. The nature of a railway is that the travel path may take a train through many varying sources of EMI. Power control stations, electrical transmission lines, and even adjacent passing trains can cause EMI disruption, and many rail systems operate in traffic heavy city centers where safety and efficiency are key. With increased commuter traffic comes the desire for increased rail speed and more, longer trains — meaning an ever-increasing need for engine power. This is yet another potential source for railway EMI. The increasing amount of rail traffic has, however, afforded display manufacturers yet another opportunity to showcase their technology, as advertising displays and on-board entertainment begins to pop up in commuter cabins, and information kiosks appear in stations. AGDisplays offers a strong line-up of advertising displays an information kiosks, which can be upgraded further with our robust EMI protection.

Law Enforcement faces the combined EMI challenges of the military and transportation industries. Law Enforcement tech continues to advance, relying heavily on radio communication, internet connectivity, and automotive displays. Much of the same EMI protection found in consumer automobiles must be ruggedized and enhanced for Law Enforcement, as their job relies so heavily on the vehicle functioning without forethought. AGDisplays offers EMI repairs, enhancements and replacements, as well as rugged mobile technology, such as smartphones and tablets, to help keep Law Enforcement officials connected and protected from potential EMI problems.

AGDisplays uses several strategies for EMI protection, depending on the application and the level of defense needed. Copperfoil tape helps to ground and block static charge emanating from a device and is a cost-effective method for isolating components. Larger die-cut or molded copper sheets are applied to individual components when higher levels of EMI are present, or when a part needs to pass high-pot testing. Our most popular methods of protection include EMI film and EMI mesh. Our film solution is a transparent, passive enhancement, laminated to the surface of the display and is compatible with touch sensors. EMI film offers a low-level EMI protection, meant mostly to block problematic emissions coming from the surface of the display. Our mesh solution is a more robust enhancement, also touch screen compatible, that offers a higher level of EMI protection than film, at the cost of slightly reduced optical clarity. Our mesh is a woven material that can be made from stainless-steel, copper, or silver and is applied via laminate, layered into an optical bond, cut as a gasket, or woven into touchscreen digitizers. EMI protective gaskets can offer EMI protection for larger display related enclosures, like industrial machine controls and outdoor kiosks, while also offering environmental protection from dust, wind, and rain. These gaskets are generally made from silicone or other EMI resistant polymers.

AGDisplays aims to shield our displays and touchscreen devices from harmful EMI radiation, while protecting nearby electronics from ambient EMI created by our equipment. With our extensive line of LCDs and EMI solutions, we hope to provide safe and high performing display technology to all industries, including the Military, Transportation, and Law Enforcement sectors. To learn more about AGDisplays’ EMI protection solutions, or to begin your own display project, please visit our website at http://www.agdisplays.com.