Warning: "continue" targeting switch is equivalent to "break". Did you mean to use "continue 2"? in /var/www/vhosts/blog.agdisplays.com/httpdocs/wp-content/themes/Divi/includes/builder/functions.php on line 5684
 2020: Display Trends for the New Year | AG Displays Blog

2020: Display Trends for the New Year 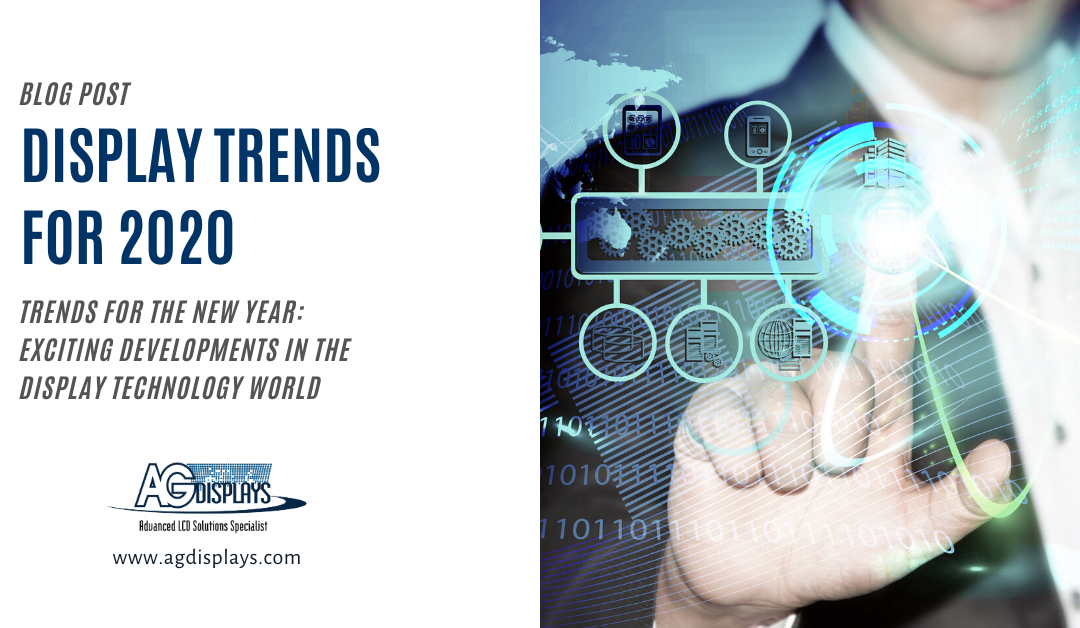 The start of the new decade brings exciting developments in the display technology world, as well as potentially industry shaking news. New and improved technologies such as OLED, QLED, and MicroLEDs are all looking to dethrone the ever-reliable LCD as king of displays. Meanwhile, LCDs continue to get more advanced and cheaper to produce, and new applications are folding the notion of rigid displays on its head. Even the business of display manufacturing is beginning to change, as the industry continues to define itself amid glutted global market, and to confine itself to Chinese factories – despite the pressure of American tariffs. Other questions confront the industry at the start of the year: Will JDI, once a major supplier of consumer displays, continue to freefall, or will the company be bailed out by Apple and others? And, will LCDs really be Made in America at Foxconn’s planned plant in Wisconsin? Finally, AGDisplays looks to continue our growing course of the last decade into the new, as we develop projects and products to advance the business and technology of the display industry.

In with the New:

OLEDs have begun to displace LCDs in a few consumer applications, such as high-end smartphones and TVs. The highly-complex and low-yield process of manufacturing OLEDs, which has long been the impediment to industry adoption, has slowly turned more efficient. Major players such as Samsung, LG, and BOE plan to increase production capacity (with some optimistic projections predicting new state-of-the-art production facilities). Apple, which uses OLEDs in multiple products (including the Macbook and iPhone), is increasing ties to the aforementioned suppliers, attempting to diversify their supply chain, and drive down costs among competitors. Samsung alone shipped up to 50 million OLEDs to Apple in 2019[1], so there is real motivation for suppliers to meet hard bargaining of the lifestyle giant.

Hot on the heels of OLED’s growing success is the newest display technology: MicroLED. LED displays themselves are not a new idea. Most of us have seen or had some interaction with an LED display, whether it is a sports scoreboard at the local arena, or a brightly animated billboard on the side of the road. LED displays are a great workhorse solution for viewing large images at great distances. LED displays, much like OLED, offer direct view backlight and deeper colors than typical LCDs, and while standard LED displays do so at a grand scale, MicroLEDs promise to condense size of the LED to that of a microscopic pixel, allowing the technology to go from scoreboard sized displays, to wearables and smartphones. MicroLEDs during testing have shown higher capabilities over OLED, such as up to 30 times brightness, a lower power/lux ratio, and an invulnerability to burn in[2]. Should MicroLED find its foothold in the market, it could quickly spell the end of OLED.

Both types of technology hold promise for one to the largest emerging segments of the display market, which is “near-eye” displays. These types of displays can be found in headsets and glasses worn by Virtual Reality and Augmented Reality users, and usually combine multiple unique elements to create an application specific display. While some high-end head-mounted displays (HMD) use light projection technology to beam images directly to the eyes, standard LCDs still dominate most available HMDs, but OLEDs and MicroLEDs, with their better pixel pitch, thinner form factor, and lower power consumption, are both obviously better suited for future devices, as the display technologies and the HMD market mature together.

Another emerging display application – the foldable display – has room for all three technologies. Foldable smartphones and tablets are now beginning to enter the market from Samsung and RAZR, both using high-end OLEDs that can fold repeatedly throughout their lifespan. While OLED is ready to present its foldability right now, MicroLED displays could quickly overtake them in the same applications. In fact, Apple is rumored to be using MicroLED displays for their own fabled foldable iPhone.  Another approach to the foldable phone comes from Microsoft with their Duo device. Microsoft has opted for two side-by-side LCDs, instead of the industry standard OLED, and use small hinge that opens similarly to the old Nintendo DS. While this approach doesn’t have the elegance and “now” factor of similar OLED devices, it can offer more screen real estate without the potential fragility of an early adoption device.

At the start of 2020 and beyond, LCDs will still dominate the total display market. Having matured for the past 30+ years, the LCD has become the most ubiquitous and reliable display technology available to both the average consumer, and to the industrial marketplace. Nearly every industrial, retail, military, marine, automotive, and aviation (among countless other industries) display up to this point has utilized the LCD.  Yet for as seemingly perfect as the LCD is, there is still plenty of room to evolve and push the technology. Dual-Layer LCDs, such as those shown recently by the company Hisense, combine 2 LCDs, a monochrome display behind a full-color panel, to vastly improve the overall contrast ratio over a typical LCD, even rivaling that of OLED and MicroLED. Yet, this display stack is cheaper to produce and easier to manufacture than either of the two other types. Sony, Apple, and others currently have dual-layer LCD designs planned for 2020, and as more companies look to tackle the dual-layer stack, improvements in bonding techniques, light filtration, and power consumption will trickle into the wider display world.

Another improvement to the standard LCD is with the incorporation of Artificial Intelligence. Novel uses, such as Bosch’s LCD based automotive sun visor, use AI to detect where the sun is hitting the display, and to shade only those areas – leaving the rest of the display transparent and unobtrusive to the driver. Another use of AI to improve LCDs is inside of VR headsets. Called DeepFocus, this system can be used to predict where a user is looking, and make use of realistic blur and depth-of-focus techniques, creating a more realistic and immersive experience for the viewer[3].

Finally, the addition of Quantum Dots has added a trendy “quick-fix” method to improving color depth for the standard LCD. By 2020, Quantum Dot enhancements will have gained a few years in the marketplace, and this year will see more brands, manufacturers, and enhancement techniques that will help drive down costs. While QD can also be added to OLED and MicroLED, the most immediate and drastic improvements can be made to the cost-effective LCD. Quantum dots offer a low-cost color enhancement to existing LCD architecture.

LCD supply has reached historic levels in 2020, making the cost of a display extremely favorable to the average consumer.  This has caused some misfortune for major manufacturers, as the industry has leaned heavily toward the cheap labor and manufacturing available in China. The past year has seen the continued rise of BOE, China’s top display producer, and the fall of JDI, the once prolific display supplier for Apple’s iPhone. Other major companies, such as Samsung have switched almost entirely away from LCD manufacturing, choosing not to compete with the low-cost Chinese brands, and instead focusing on further developing OLED and MicroLED technologies, where there is an opportunity to trailblaze manufacturing and marketing techniques.  Meanwhile, the LCD oversupply hasn’t totally stopped investments in the LCD market. BOE plans to fully scale their 10.5 Gen plant to full capacity, with rumors of a massive 11 Gen facility in the works. And of course, with such a supply of panels available, there is plenty of opportunity for growth within the supplementary markets. Module makers, integrators, brokers, and repair shops will have ample material buoy the LCD business.

Even in the United States – where LCD manufacturing is generally considered far too expensive to be practical – there is hope for growing jobs within the industry. Foxconn, a global LCD manufacturing giant, has broken ground on a proposed 10.5G manufacturing plant with the original promise of creating 13,000 jobs. Unfortunately, delays, political mood swings, and broken promises have already led to a new proposal, and instead of hiring an LCD manufacturing workforce, Foxconn will instead use the plant to focus on R&D, and hire up to 3,000 scientists and engineers, with the possibility of up to a 6.5 Gen production facility. While skepticism remains high that LCDs could ever be cost-effectively Made in America, in 2020 there is at least some opportunity for America to gain a greater foothold in the LCD market, and vice-versa.

For the year 2020, AGDisplays looks to expand our market reach by offering cutting edge products and outstanding service. Our new website offers not only great products and display technology, but also wealth of LCD technical knowledge provided by our team of engineers. Here you can also find industry specific services, and learn how AGDisplays can improve or benefit your current display needs. Our new line of off-the-shelf consumer products include the latest rugged smartphones and tablets, while our industry oriented designs offer the best available displays for the retail, marine, and medical trades. Our AGDisplays turn-key line of rugged high-bright and NVIS panel mount displays have a long standing reputation for quality and endurance, and can be found worldwide in the most extreme conditions helping our combat forces.  And finally, our dedicated team is committed to the providing the most thorough research, engineering, and design to ensure our displays are real-world ready and exceed all expectations and beyond. To learn more, please visit our website at: https://agdisplays.com/