Warning: "continue" targeting switch is equivalent to "break". Did you mean to use "continue 2"? in /var/www/vhosts/blog.agdisplays.com/httpdocs/wp-content/themes/Divi/includes/builder/functions.php on line 5684
 LED vs. CCFL: Choosing the Right Backlight for your Display | AG Displays Blog

LED vs. CCFL: Choosing the Right Backlight for your Display 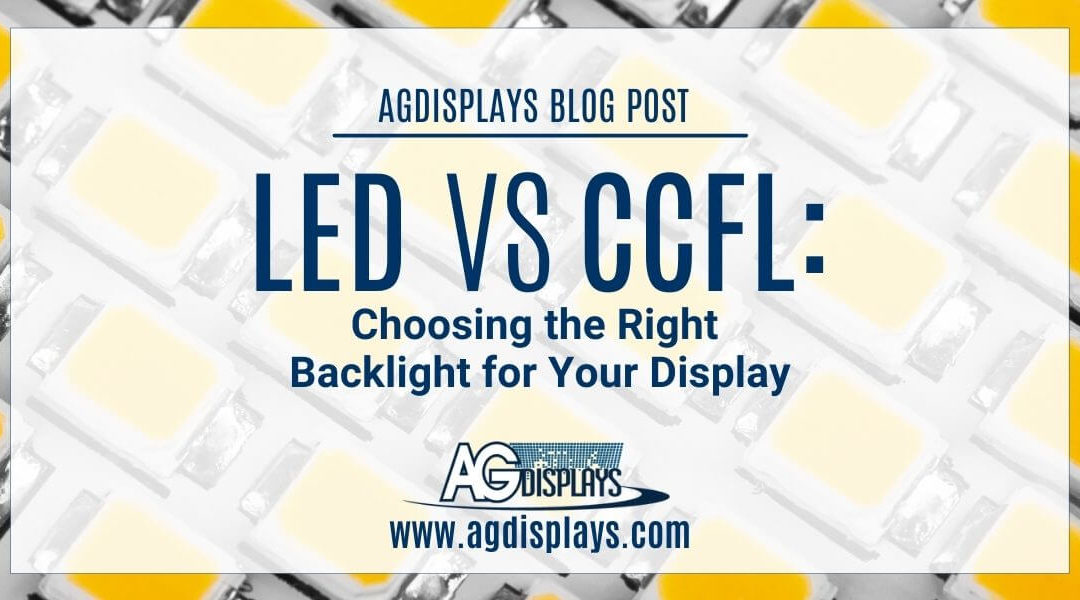 Whether LEDs or CCFLs, typical LCD monitors need a backlight to produce visible images on screen. Most modern displays employ the use of LEDs to illuminate their images, however many older or lower cost displays still use the tried-and-true compact cold fluorescent as their light source. (OLEDs, a newer type of self-illuminating display, are a topic for another discussion).

The internal set-up of either a CCFL or LED based display is generally the same. The light source is placed either at the edges of the screen or directly behind, and the light is then funneled though a light guide and various enhancement films to evenly distribute and clarify the light. Finally, the light passes through and illuminates the image being produced by the LCD.

CCFLs (cold cathode fluorescent lamps) were the backlight of choice for most early iterations of the consumer LCD. Consisting of a hollow glass tube filled with reactive mercury gas and sealed with electrodes, the CCFL as a technology has been pursued since Edison’s invention of the incandescent light-bulb. Because of its relatively simplistic design, the CCFL has become known as a cheap and durable electronic light source. It is also easily scaled, meaning the light can be miniaturized for smaller and cheaper electronic devices. CCFLs produce an even, smooth light, which can easily be distributed behind the LCD screen for optimal color and contrast.

CCFLs, of course, are not without their disadvantages. CCFLs typically require a relatively high voltage to reach peak luminance, and with the extra voltage often comes increased heat, in turn causing potential degradation over time and a shorter component lifespan (not to mention a greater overall operating cost). CCFLs are also potentially dangerous if improperly handled or broken. The mercury gas contained inside can be hazardous to human health, especially to the lungs.

If a CCFL backlit display is a of concern for your business, AGDisplays has recent CCFL design experience, and has worked with multiple customers and manufacturers to develop and produce LCD CCFL backlights of various shapes, lengths, color temperatures and voltage requirements. We also specialize in CCFL repairs such as bulb replacements, wire and connection repairs, and CCFL inverter replacements and repairs as well.

While CCFLs were a great choice for early versions of the LCD, as the display technology matures and continues to compete with other emerging tech like OLED and e-ink, a more capable and efficient backlight is required.  LEDs (light emitting diodes) first appeared for commercial use about a century after Edison’s invention of the light-bulb, but in the time since, they have become the light source of choice for nearly all electronic lighting applications. The function of an LED can be described as an electro-luminescence, produced by an electric charge in combination with a semi-conductor. The color of the LED depends on the specific material of the semiconductor.

LEDs greatest overall benefit is their energy efficiency. LEDs require a relatively lower voltage to reach peak luminance compared to CCFLs. In turn, LEDs also have a longer lifespan, lower health concerns, and lesser environmental impact than their CCFL counterparts. Counterpart to the higher overall luminance, LEDs can also produce a lower overall luminance, resulting in greater contrast and deeper blacks in an LCD application.  LEDs can be scaled from large LED based video boards such as those found on billboards or scoreboards, or miniaturized for localized lighting behind an LCD monitor. Other benefits of LEDs over CCFLs include faster response time, less flicker, and better color.

As with CCFLs, LEDs also have a few disadvantages. LEDs typically have a higher up-front cost than CCFLs. LEDs have the potential to degrade and color shift over time. LEDs are also potentially hazardous to eye health and sleep quality, especially if viewed in the dark. LEDs emit a wavelength of blue light known to interfere with melatonin production and cause potential eye damage.

There are a few other types of backlights that, although they are not the subject of this discussion, are worth noting. OLED is a type of flexible self-illuminating display in which each pixel is its own light source. Transflective displays use ambient light from outside the display to illuminate the screen. Phosphorescent, or glow-in-the-dark, displays use light-emitting lamination like the type commonly found on wrist watches.

AGDisplays specializes in upgrading existing CCFL backlights into modern and efficient LED systems. We design our own line of edge-lit LED rails to maximize brightness while focusing on power reduction. We pair our LED rails with fully dimming and adjustable LED controllers, allowing for precise user control for any lighting environment. Our LED upgrades provide a boost in brightness, power control, color depth, and overall panel durability. CCFL to LED conversions may be an important consideration for businesses with a fleet of aging displays. Instead of full display replacements, AGDisplays can quickly swap out existing backlights and return the displays to service without long lead times.

Whether servicing a display with CCFL backlights, switching from CCFL to LED, or maintaining your existing LED backlight system, AGDisplays is your home for LCD backlight design, manufacturing, or procurement. Please visit www.agdisplays.com to learn more.