Warning: "continue" targeting switch is equivalent to "break". Did you mean to use "continue 2"? in /var/www/vhosts/blog.agdisplays.com/httpdocs/wp-content/themes/Divi/includes/builder/functions.php on line 5684
 NVIS Inside and Out | AG Displays Blog

NVIS Inside and Out 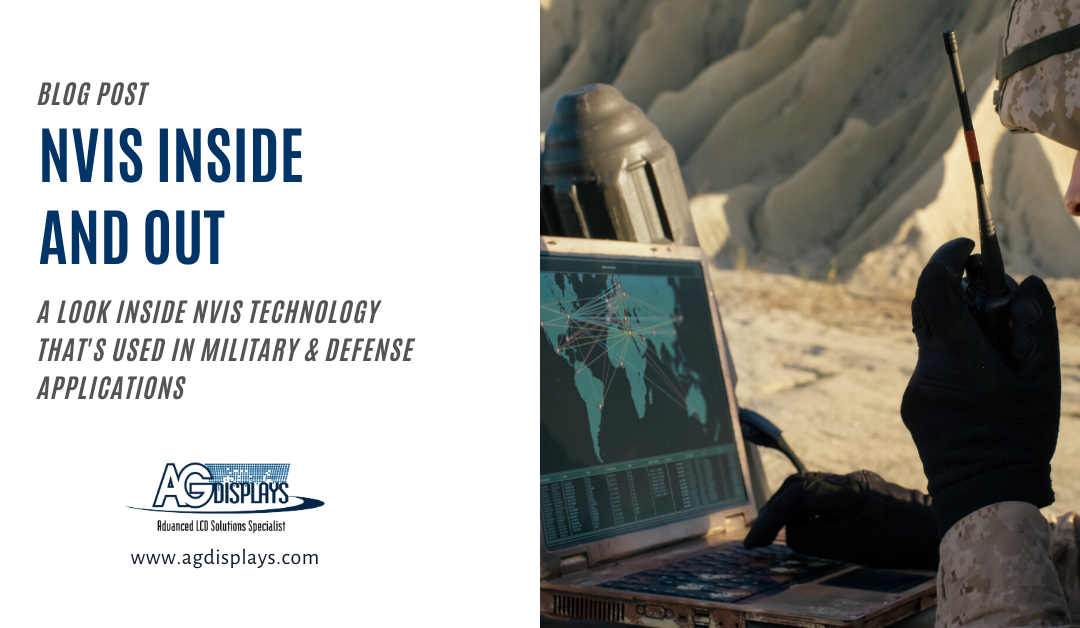 A standard LCD screen has potential applications that are more expansive than any engineer could have imagined. The Goldilocks approach to LCD manufacturing has, however, limited the amount of out-of-the-box possibilities for many standardized models, and left some users searching for a more personalized approach. Industries like avionics, commercial and manufacturing, and the military particularly require LCDs to be used out doors and in conjunction with other external imaging equipment like goggles, glasses, binoculars, cameras or HUDs. For these customers, AGDisplays has engineered enhanced NVIS displays to be used in low light, low power situations, and innovative high bright LED rails for easy readability and use in harsh ambient sunlight. Because of AGDisplays ability to engineer enhancements around existing panels, we are able to offer the most advanced LCD NVIS upgrades available to a near endless supply of models and designs.

Night Vision Imaging Systems (NVIS) in our terms defines the combination of an enhanced display with the use of night vision goggles, and should conjure the familiar green and black image. This type of system is generally used by military and law enforcement, but has begun to find civilian applications with private investigators, sportsman and hobbyists, as well as some industrial uses too. Because Night Vision goggles operate at such an extreme spectrum of light, a display at average LCD power levels will be impossible to read with the equipment. Possibly even blinding. Meanwhile, at levels compatible with the goggles, the display would be to dim to read with the naked eye. AGDisplays’ custom NVIS enhancements like films and filters allow the correct amount to light to be used in conjunction with Night Vision while still being readable to those not using the equipment, making the display multi-function, and useful to more people at once. For example, a helicopter pilot and his crew may not all be wearing Night Vision goggles, but each member could read the instruments regardless.

AGDisplays began designing NVIS solutions in 2009, and have since engineered multiple design solutions and combinations for a bevy of conditions. One of our most straightforward NVIS enhancements is the addition of a passive polymeric film overlaying the entire front face of the screen. Although no internals of the panel are changed, this simple addition provides impressive benefits like near-infrared light absorption, while having a minimal impact on the visible spectrum of the device. All while allowing for a minimal distortion of the full color of the screen. NVIS enhancement film also comes in a range of MIL-STD-3009 compliant colors (although green is our favorite). This film is fit to size, scratch resistant, and safely removable, making it ideal for mobile applications like tablets, smartphones, and even laptops. NVIS enhancement film is also a complete and rugged solution to those requiring Night Vision compatible lighting on their existing panels, because it can be retrofit to nearly any existing LCD or CRT, is compatible with various light sources like OLEDs, LEDs, incandescent and fluorescent backlights, and does not interfere with touch enabled devices. And because this enhancement requires no disassembly, it has no impact on the manufacturer’s warranty of a device.

For more demanding or technical applications, our dual mode backlight system combines both Generation 4 high bright LEDs and Class A or Class B NVIS filters inside the panel. This enhancement is often more complicated than a passive film and is uniquely engineered to the individual LCD model. Because it requires changing internal components and the creation of a specialized LED rail, the resulting panel will be a one-of-a-kind AGDisplays build. With the dual mode backlight, the two LED sources can operate independently of each other, and give the enhanced panel the ability to switch between day and night modes, saving power and allowing the screen to be used with NVIS compatible goggles only when necessary. Having this option gives the equipment an extended range of uses, as well as an extended lifespan of up to 100,000 hours. While the high bright backlight gives the panel excellent readability in prohibitive ambient light, the NVIS backlight is ideal for near pitch darkness, and operates at just 1 watt of power.

AGDisplays’ has seen our NVIS equipment operate in the field for militaries around the world. AGDisplays NVIS can be found on board tanks and trucks, inside flight simulators, and in the hands of operators using our enhanced mobile devices. Our marine NVIS enhancements are designed especially rugged to handle life at sea, and are found in Naval ships at port and en voyage. Safety and satisfaction often rely on the reliability of your equipment, and no matter what the application, AGDisplays is committed to the quality of our services and to dependability of our NVIS enhancements.

To learn more about AGDisplays, NVIS and our custom design solutions, please visit our website at agdisplays.com